Dagmar Gustafsson had swallowing difficulties and an inflated stomach for several years. It took 10 years until she was lucky enough to meet a speech therapist who could prescribe IQoro.

Just over five years ago Dagmar had a balloon catheter inserted in her esophagus because of her swallowing difficulties. Two years later the problem re-occurred, but her own difficulties were pushed aside by the need to provide day round care for her husband who was suffering from Alzheimer’s.

Only much later did Dagmar get help from a speech therapist who prescribed an IQoro neuromuscular training device.

The first swallowing difficulties crept up on her ten years ago. But it wasn’t because of her throat problem that Dagmar first turned to the health services for help.

The first time turned to the health services, it was for my stomach. It was inflated like a balloon.

– No, I had a problem with my stomach. It was inflated like a balloon. Gastroscopy showed that I had hiatus hernia, says Dagmar as she comes in from the garden.

Diagnosis of cancer, and sorrow

Nobody had figured out that the problem in the throat and pharynx were caused by the hiatus hernia. But when her difficulties intensified and food was sometimes getting stuck in her throat Dagmar, had her esophagus widened, which relieved the problem for a while.

– At the same time doctors discovered that I had cancer in the intestine and would need to have an operation. The intervention went well and today I am free of cancer, says Dagmar.

When his wife was having the operation and whilst she was convalescing, her sick husband was moved to a care home. She spent as much time with him as she could until his death last year.

The more I recovered mentally, the more obvious my physical problem became.

Her situation with healthcare and her grieving over her loss, meant Dagmar had no time to think about the swallowing difficulty that had now re-stablished itself. Nor would these problems be prioritised during her months of grieving and recovery that followed.

– But the more I recovered mentally, the more obvious my physical problem became. I avoided eating in company because I was frightened that food and drink would get stuck in my mouth, this lead to my being socially isolated.

A conscientious and professional speech therapist

Dagmar got no help from the local healthcare system and, after being bounced from pillar to post, an increasingly-irritated Dagmar insisted on a referral to an ear, nose and throat doctor and a speech therapist.

Her daughter-in-law had just found a newspaper article about a woman with a similar problem. She had been helped by new treatment method in the form of a neuromuscular exercise.

They were serious and professional throughout.

– I showed them the article and felt immediately that they were listening. Usually you have to fight your corner for these things, but they were serious and professional throughout. It seemed that they already knew about the method because the speech therapist said that she could prescribe an IQoro to me straight away, continues Dagmar.

No need to sneak around any longer

After quickly reading the manual, Dagmar started the program and performed the swallowing tests that are included with the product, which only confirmed the problem. After just an incredible three days’ training she could feel that something had changed.

– Difficult to describe, but different, softer in some way. 14 days later I could swallow almost anything. It was a huge relief that spurred me on to continue the exercises. 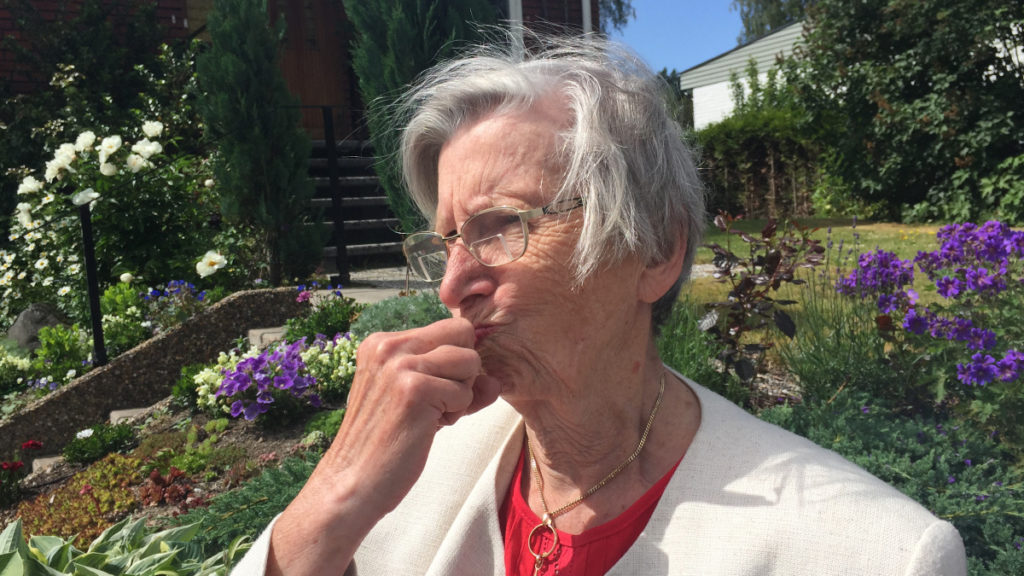 Up until now Dagmar has trained for a few months. She has performed the swallowing measurement tests every three weeks in order to follow her progress. As well as a continually improving ability to swallow, Dagmar feels an increased muscle strength in both face and mouth.

Life has changed in every way and her will to live has returned.  Wrestling with food and drink are a distant memory and Dagmar now loves to eat out with friends when the opportunity arises.

– It may sound daft, but I think it’s fun to wake up in the morning and discover a new day, concludes 87 year-old Dagmar.

This website uses cookies to improve your experience while you navigate through the website. Out of these cookies, the cookies that are categorized as necessary are stored on your browser as they are essential for the working of basic functionalities of the website. We also use third-party cookies that help us analyze and understand how you use this website. These cookies will be stored in your browser only with your consent. You also have the option to opt-out of these cookies. But opting out of some of these cookies may have an effect on your browsing experience.
Necessary Always Enabled
Necessary cookies are absolutely essential for the website to function properly. This category only includes cookies that ensures basic functionalities and security features of the website. These cookies do not store any personal information.
Functional
Functional cookies help to perform certain functionalities like sharing the content of the website on social media platforms, collect feedbacks, and other third-party features.
Performance
Performance cookies are used to understand and analyze the key performance indexes of the website which helps in delivering a better user experience for the visitors.
Analytics
Analytical cookies are used to understand how visitors interact with the website. These cookies help provide information on metrics the number of visitors, bounce rate, traffic source, etc.
Advertisement
Advertisement cookies are used to provide visitors with relevant ads and marketing campaigns. These cookies track visitors across websites and collect information to provide customized ads.
Others
Other uncategorized cookies are those that are being analyzed and have not been classified into a category as yet.
Save & Accept