To get dysphagia as a teenager can be very difficult. Here, Klara and her mother Pernilla tells their stories about the treatment with IQoro.

“Looking back I realise that Klara had had swallowing difficulties for a very long time. She often complained of a having a lump in her throat as if something were stuck there.

In the beginning, I didn’t think much about it. I just thought she needed more time to eat her meals than others.

When the problem didn’t go away as she grew up, it was obvious that something was wrong. Klara began to feel worse and worse, was constipated and started to have a pain on one side under her ribcage.

Klara finally got a diagnosis

In 2012, after countless trips to the health center, she was diagnosed as gluten intolerant. That was a relief! At last we had an enemy to fight.

But despite the fact that Klara kept to a gluten free diet, the problems continued. It was enormously frustrating.

The doctors had no response, just a poor diagnosis that meant nothing at all. When the problem began to affect her great passion, skiing, it was tough for us to stand by and watch her suffer.

I work with medtech, and have been a researcher myself, so I’m used to search for information. I have spent a lot of nights on google, trying to find a solution.

I work with Medtech and have been a researcher myself, so I’m used to search for information. I have spent a lot of nights on google, trying to find a solution. I knew that something was wrong. The question was what?

One day, my meeting with Mary Hägg many years before popped up in my brain. We had met at work and I remembered that Mary talked about how she researched the subject of swallowing difficulties, so I got in touch with her again.

We had to nag our way to a swallowing x-ray

From my description of Klara’s condition, Mary suspected – with the reservation that she’d never met the patient – that Klara was suffering from mechanical swallowing difficulties – dysphagia.

After our conversation I obstinately nagged my way to a swallowing x-ray at the hospital, which indeed showed Klara had delayed swallowing reflexes. We ordered an IQoro immediately.

Klara was a bit sceptical in the beginning and only trained sporadically. But when she began to notice small improvements, she got motivated to train according to the instructions.

The swallowing is easier and the snoring is gone.

Nowadays, a little more than half year later, the pain in her digestive tract has reduced significantly and swallowing is easier.

In addition, Klara’s snoring problems are gone, which is a relief for a young girl that often has to sleep with other teenagers at various ski camps. Our daughter has now started at a Skiing Boarding School in northern Sweden and is doing what she loves the most. 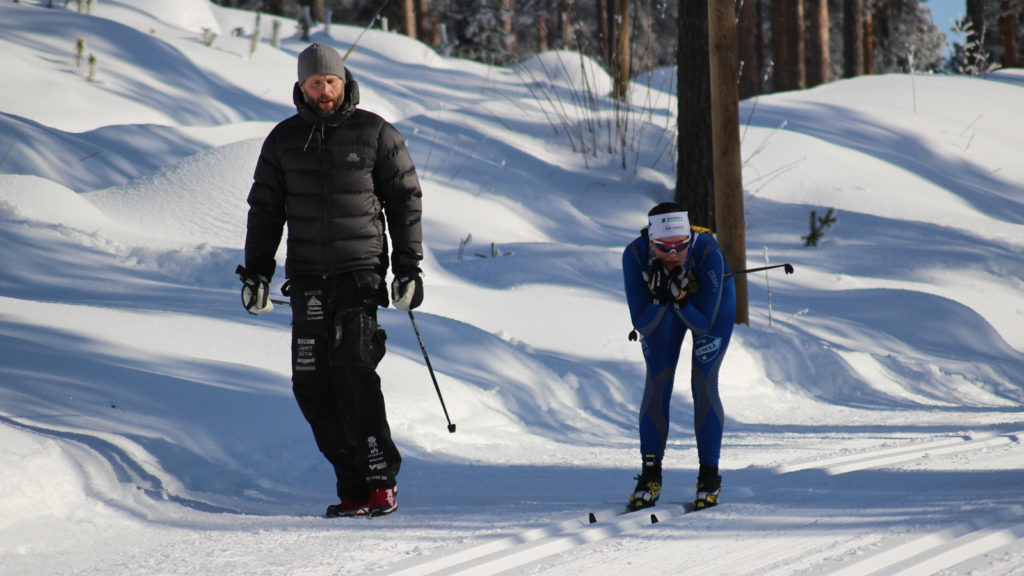 Klara is now feeling much better

Klara is now considerably happier and more in harmony overall. But it might take som time for the fear and worries of getting something stuck in her throat to go away.

Despite the fact that her health is decidedly improved after training with IQoro, the doctors continue to question its effectiveness. That’s outrageous, I think!

Despite the fact that the healthcare system – after many attempts – now agrees that Klara has a delay in her swallowing reflex, she has not been offered any help for her difficulties. And the doctors keep questioning the effectiveness of IQoro, even though Klara’s health decidedly improved after she started the treatment. That’s outrageous, I think!

So if I as a mother can help somebody else in the same situation I want to do it. There are many that are suffering. Thanks to my profession I know how important it is to address problems like this. If we hadn’t found this research-based treatment ourselves, Klara would not be where she is today.”

Klara, 18 years old: ”My stomach is much better now”

Eighteen-year-old Klara Abrahamsson in Lycksele attends a Skiin Boarding School with cross-country skiing as her main focus. Her aim is to get a position in the national ski-team. For a long time she has been suffering from swallowing problems, stomach pain and acid reflux, but with IQoro, the problems have subsided.

The fact that I also stopped snoring is a bonus when we are at training camp.

– It has become a routine that I want to continue with, because I feel so much better. And the fact that I also managed to stop snoring is a bonus when we are at training camp, she says and laughs.

Even when Klara was little, she had difficulties swallowing food. Finishing everything on her plate took forever. During adolescence, she suffered from stomach ache and acid reflux symptoms. She continued to go to school, struggled and worked hard despite her problems. But at the age of fifteen the symptoms worsened and the family decided to seek help from the health services.

A swalowing x-ray confirmed that Clara had a slow swallowing process, a condition in which there was no cure for. Klara was instead provided with drugs to neutralise stomach acid.

The training relieved the problems

About half a year later, my mother came home with a small “plastic device” – an IQoro – that would help me, Klara remembers.

– I was skeptical. But my mom is like most moms. She nagged so that I would start training with it. Eventually, I did as she said. I trained every morning, after school and in the evening. After just a few weeks, I had less stomach ache and less acid reflux. After that, it was easy to continue.

It’s really cool that it helps, and that no drugs are involved.

–  I’m not yet completley symptom free, but I’m a lot better! I have my IQoro next to my toothbrush, and now I train twice a day, instead of three as in the beginning.

–  If any of my friends would tell me that they have similar issues, I would definetley recommend IQoro. It’s really cool that it helps and that no drugs are involved. Just natural training with no side effects.

Performance cookies are used to understand and analyze the key performance indexes of the website which helps in delivering a better user experience for the visitors.

Analytical cookies are used to understand how visitors interact with the website. These cookies help provide information on metrics the number of visitors, bounce rate, traffic source, etc.

Advertisement cookies are used to provide visitors with relevant ads and marketing campaigns. These cookies track visitors across websites and collect information to provide customized ads.

Other uncategorized cookies are those that are being analyzed and have not been classified into a category as yet.